'The Voice' kicks off its 19th season - people 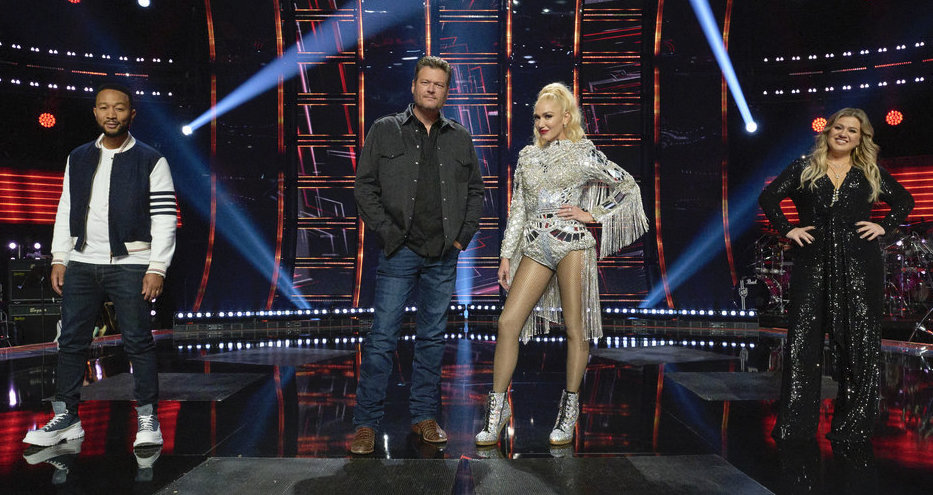 Michel Gohou moves the canvas with this phase: "From hunchback to ...

DON'T MISS: “The Voice” - Slowly but surely, the fall TV season is looking more familiar as the popular singing competition returns for its 19th go-around. Also returning for her fifth season is Gwen Stefani, who joins Kelly Clarkson, John Legend and Stefani's Blake Shelton on the coaches' panel. (Stefani replaces Nick Jonas). Following COVID-19 protocol, the show will, as usual, be filmed at its Universal Studios soundstage, but without a live audience. Even those rotating chairs have been spaced farther apart to observe social distancing. The action kicks off with the blind auditions. (8 pm Monday, NBC).

SUNDAY: It's a highly welcome Halloween treat: “The Simpsons” frighteningly hilarious “Treehouse of Horror” episode. This year's 31st edition includes a scary look at the 2020 election, parodies of Pixar and “Spider-Man: Into the Spider-Verse” and a ninth birthday Lisa just can't get over. (8 pm, Fox).

SUNDAY: “Saturday Night Live” alum Leslie Jones is our host for “Supermarket Sweep.” A fast-paced revival of the classic game show, it has teams using their grocery shopping skills and knowledge of merchandise to capture cash prizes. (8 pm, ABC).

TUESDAY: Break out the peanuts and Cracker Jack. After making their way through a truncated season and surviving an expanded playoff bracket, two teams will finally square off in Game 1 of the 116th World Series at Globe Life Field in Arlington, Texas. (5 pm PT; 8 pm ET, Fox).

TUESDAY: “Whose Vote Counts” is the latest timely installment of the “Frontline” documentary series. With the national controversy over voting by mail making headlines, writer and historian Jelani Cobb investigates allegations of voter fraud and disenfranchisement in the lead-up to the 2020 election. (9 pm, PBS).

WEDNESDAY: “The Goldbergs” kicks off a new season with back-to-back episodes. In the opener, Beverly surprises the family with an end-of-summer vacation to Miami with the flight resembling the classic film “Airplane.” Season openers of “The Conners” and “black-ish” follow. (8 pm, ABC).

THURSDAY: The “Supernatural” farewell tour continues with an episode in which Sam and Dean are asked to investigate the murder of a childhood friend. It has them returning to a motel from their past and pondering a case they thought was solved a long time ago. (8 pm, The CW).

FRIDAY: “American Masters” turns its attention to Michael Tilson Thomas, the Grammy-winning conductor, pianist and composer. The documentary follows the free-spirited Tilson Thomas from his childhood in California to the world stage and his leadership roles with the San Francisco Symphony and New World Symphony. (9 pm, PBS).

FRIDAY: Based on the novel by Walter Tevis, “The Queen's Gambit” is a period drama series that explores the costs of genius. It follows a young orphan (Anya Taylor-Joy) who discovers an astonishing talent for chess, but battles substance abuse and other demons while rising through the ranks of a male-dominated world. (Netflix).

SATURDAY: Halloween is still a week away so that must mean it's time for the feel-good Christmas movies to begin. In “Jingle Bell Bride,” a wedding planner (Julie Gonzalo) ends up in a remote Alaskan town and falls in love with its holiday pageantry, as well as the local guy (Ronnie Rowe) helping her find a rare flower. (8 pm, Hallmark Channel).

This article appeared first (in English) on https://www.mercurynews.com/2020/10/18/tv-this-week-the-voice-kicks-off-its-19th-season/

Johnny Depp to Speak out On TV on Dramatic Divorce - Video

Michel Gohou moves the canvas with this phase: "From hunchback to hard worker"!

Brigitte Macron absent: where has the First Lady gone?