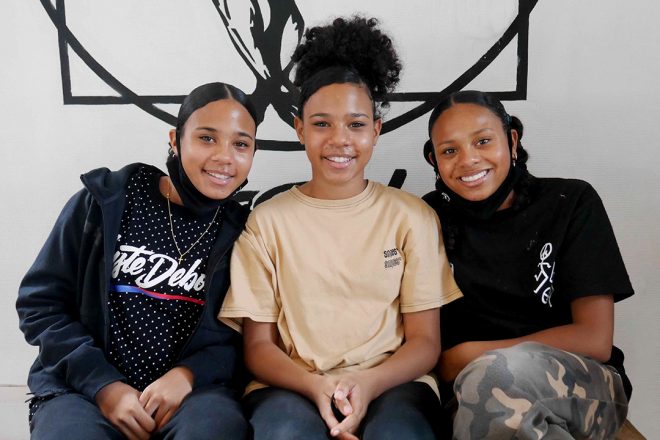 With their choreographies on the hits of Tupac, Fally Ipupa or Ray Charles, Norah, Yarah and Rosa (alias “Let It Happen”) have accumulated millions of views on social networks. Meeting with three dancers with contagious energy.

It's become a habit: every new video posted by Norah, Yarah and Rosa Mukanga on social media flirts with one million views. Gifted children of hip-hop, these three Dutch sisters of Congolese origin shake the Web with their supercharged choreography and their contagious energy.

At only 14 years old - for the twins Norah and Yarah - and 12 years old - for their younger sister Rosa, they appropriate the classics of the biggest names in African-American hip-hop, soul, pop and rap - of Ray Charles to Notorious Big via Prince, James Brown or Alicia Keys - but also African hits.

Always in the open air, in confidential alleys or on the main square of Maastricht, they thus tune their steps on "Inama" of Fally Ipupa and Diamond Platnumz, on "Maradona" by Nigerian singer Niniola, or on "Premier Gaou". And do not hesitate, in the messages accompanying their video, to directly challenge these artists: " Magic System, we literally grew up with your music ”,“ dancing to “Maradona” always makes our hearts happy ”.

From Maastricht to Los Angeles

The performances of “Let It Happen”, their stage name, are now covered and shared by thousands of anonymous people and show business stars. Alicia Keys and Janet Jackson, rapper Snoop Dogg and actress Viola Davis have thus virtually dubbed them. “It's really unreal for us. But we are very grateful, it touches us a lot, ”they say in unison.

Originally from the Dutch region of Limburg, they now have their entrances in Los Angeles. They have collaborated with several major American television channels and brands and have twice taken to the set of the Ellen DeGeneres Show, one of the biggest American talk shows. “We were very nervous, we didn't really realize what happened until afterwards, when we saw the videos,” admits Norah.

It all started as simple as possible for these three sisters. “We started dancing at a very young age,” say the twins. There was always music in the house. "And in particular the playlist of their grandmother, who came from the DRC to the Netherlands when their father, Osongo, was only 3 years old. "She always listens to African music while cooking," laugh her granddaughters.

Very quickly, Norah and Yarah began dance lessons and, soon joined by Rosa, took part in competitions and events all over Europe: in Monaco, Amsterdam, Paris… We met them elsewhere at the Juste Debout school, in the north of the French capital, where they follow a course lasting several days with six teachers. But what remains to be taught to these young street dancers, so comfortable on the track? The Mukanga sisters create most of their choreography themselves. "We start the music and go freestyle," says Yarah.

Undoubtedly precocious, the three sisters say they are totally free in their artistic choices and supported 100% by their parents. If their father, Osakongo, was present when we arrived to make the introductions, he slipped away to let his daughters handle the interview themselves, like pros.

But where do you get that confidence and inspiration when you're not yet 15? “My sisters inspire me every day,” Norah responds spontaneously, triggering Rosa and Yarah's smile. Despite the masks that hide half of their face - sanitary precautions require - their complicity is obvious.

Recently, they have found a space for expression in the Black Lives Matter movement. At the end of May, they solemnly demanded justice for George Floyd, staging himself on the track "Changes" by rapper Tupac.

Introduced by an extract from I have a dream by Martin Luther King, their latest video is a tribute to African-American Breonna Taylor, killed in March by police in Louisville. “Your name will never be forgotten and we will continue to fight and work on 'this collective dream' until it becomes a reality,” they write.

“We think it's important to tell stories and get messages across,” Yarah confirms. We try to use our platform to express ourselves, and express ideas, by speaking from our heart. The audience of the Mukanga sisters is in fact only growing. Almost four years after their first moment of glory - on the stage of the Gelredome stadium, with Justin Bieber -, this summer they shared the virtual poster of the prestigious Lollapalooza festival with Paul McCartney.

All, they claim, without pressure. “If we don't feel it, we don't,” Rosa simply replies. A relaxation that sticks to their name: " Let it happen ("Let it happen"), it has always been our way of thinking, of looking at things ", assures Yarah.

A credo that is quite successful for them. Last February, they randomly met the American singer and dancer Usher in a Parisian street and improvised a mini-choreography with him. A few steps shared more than 5,6 million times on Tik Tok, the Chinese network.

Genocide of the Tutsi in Rwanda: Eugène Rwamucyo sent to the Paris Assize Court - Jeune Afrique