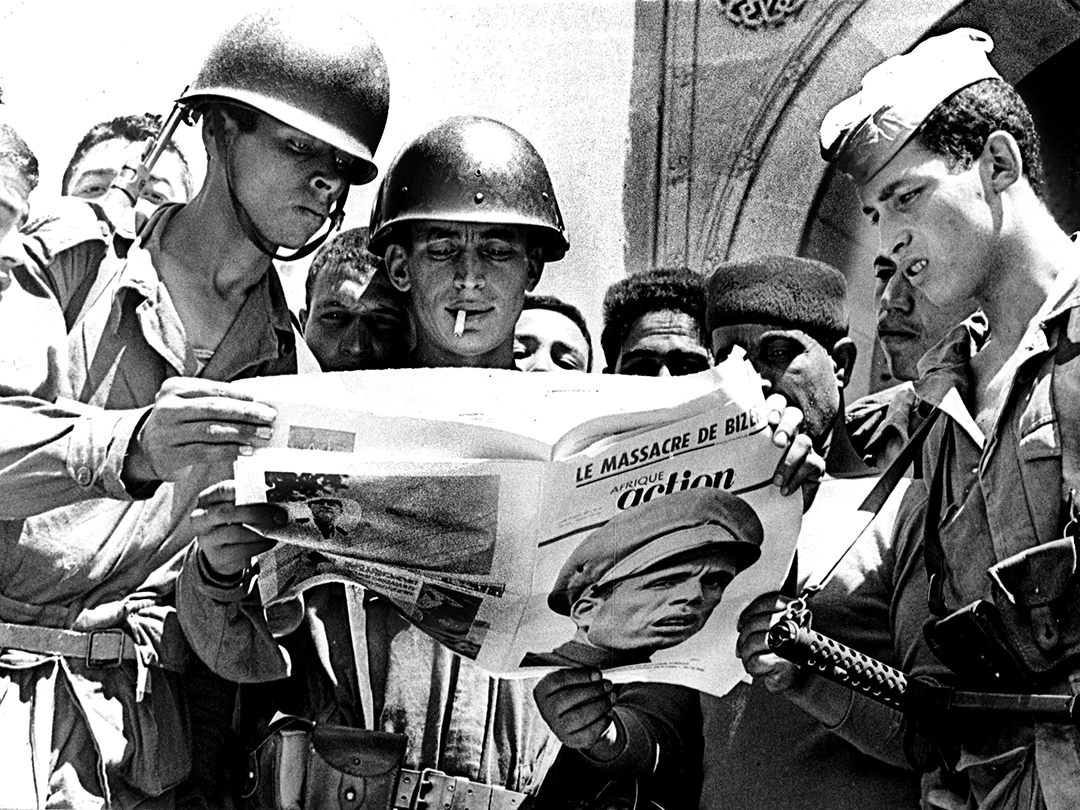 Sixty years ago, when most of the countries of Africa gained independence, Béchir Ben Yahmed created in Tunis a weekly whose ambition was to carry the voice of an entire continent: "Africa Action", which was to quickly become “Jeune Afrique”.

It was sixty years ago, October 17, 1960 precisely. The readers of French-speaking Africa - not all, naturally, Algeria in particular was then deprived of it - discovered in the kiosks a new information magazine entitled Africa Action. Subtitle: “Pan-African weekly”.

At the helm of the adventure, a duo that Tunisians know well: Mohamed Ben Smaïl, editor-in-chief, and Béchir Ben Yahmed (BBY), who, as he will tell later, manages “everything else”: editorial line, recruitments, subscriptions, sales, distribution, advertising, administration, external relations ...

In 1955, the two men had already launched The action, with the subtitle “Tunisian weekly”. Then, with history advancing and the hour of independence approaching, the weekly became “Maghrebian” before going out of business in 1958. The project, however, only asks to be reborn, winning each time. in ambition.

In this year 1960, Africa moves, just like Tunisia ... and BBY: first minister of the first Bourguiba government, then developing companies, forging trade agreements, he travels, meets the separatists of sub-Saharan Africa and the revolutionaries Latin Americans. A mighty wind is blowing over the world. Tomorrow, neighboring Algeria, the whole of Africa will be independent. A media will have to carry its voice, in any case that of French-speaking Africa. “At the time,” recalls BBY, “Africa didn't exist, I didn't know it. However, with great oblivion, I told myself that we needed a newspaper for the whole continent. "

Sent by Bourguiba to meet the Congolese independence leader Patrice Lumumba, the former boss of The action comes back confirmed by the idea that the alleged "differences of civilization" between blacks and Arabs of Africa do not exist, that Maghrebians and Sub-Saharans are linked by "a feeling of fraternity which cannot be explained".

Nevertheless: between a Tunisian weekly and a Pan-African magazine with international distribution, the step to climb remains high. Without complexes, Ben Smaïl and Ben Yahmed go to seek advice from those they consider to be the best French-language press bosses of the time: Hubert Beuve-Méry, at World, Jean-Jacques Servan-Schreiber, at L'Express. When the second asks them to take over the international edition of his magazine, the two men politely decline. It is not at all their project.

With this new "pan-African weekly", history is being written before the eyes of its first readers

It is in Gammarth, in the little house that BBY owns by the sea, that the future newspaper is developed during the first half of 1960. The publishing company is created in July. Its modest capital (1 dinars at the time) is held in equal shares by two shareholders: BBY and the communist lawyer Othman Ben Aleya, who will retire a few years later. Cash is nonexistent, but a few banks follow: after all, The action, launched by the same team, had attracted 15 readers. Africa Action should succeed in recovering them ...

A handful of collaborators

The newspaper takes up its quarters in a small two-story building located avenue de la Liberté, in Tunis, near the Belvédère park. The editorial staff, located at the top, has only a handful of collaborators: reporter-photographer Abdelhamid Kahia, Josie Fanon (Frantz's wife), Dorra Ben Ayed, as well as a mysterious Frenchman, conscientious objector or deserter. of the contingent stationed in Algeria, no one really wants to know, who calls himself "Girard". Jean Daniel offers advice and articles, just like Guy Sitbon - then correspondent of the World in Tunisia - and Tom Brady, local representative of New York Times. For lack of resources and sufficient personnel, everyone must know how to do almost everything, and hardly count their hours.

On the ground floor of the building, Chérif Toumi, the man in charge of finances. "Sympathetic, helpful, easygoing but suffering, when it comes to the money of the newspaper, chronic paralysis on the side of the cash drawer", wrote later François Poli, the head of the rewriting of the articles. Rewriting, in the lingo.

The newspaper is printed on the presses of the dying man Tunisian dispatch. The first numbers stain the fingers and, say the old ones, are full of typos, but the essential is not there. This October 17, the new “pan-African weekly” is in newsstands, and history is being written before the eyes of its first readers.

On the cover, whose graphic sobriety can only command respect, a portrait of Dag Hammarskjöld, the Secretary General of the United Nations, who will play a role as central as it was criticized in the accession to independence of the DR Congo, before to disappear in 1961 in an air crash. The other two cover titles: “Sixty days with Lumumba” and “Bourguiba: la Chine et nous”.

Decades later, all the pioneers of this founding team will recall the good humor that prevailed at the time. François Poli remembers discussions “at the edge of the beach or on the beach, in a swimsuit, between two baths in the sea and two shots of rosé wine”. Guy Sitbon, meanwhile, believes he can say that the decision to launch a continent-wide newspaper was taken by BBY during a game of table football: “We were four: Tom Brady, Jean Daniel, Béchir Ben Yahmed and my person. All four in swimming trunks, me in a team with Béchir, who was just about to slam a shot. He made a wish out loud: “If I score, I create a journal”. »Dream memory? The journalist recognizes it: “My memory is fabulous”. But nothing to spoil the pleasure, because, he concludes, “Africa was young and beautiful. U.S. too. "

Quickly, the team is growing. An office is opened in Paris, which will be managed by Robert Barrat, then by Paul-Marie de La Gorce. Avenue de la Liberté, visitors follow one another. Many become regulars and friends. New employees are recruited. “For the first time, recalls BBY, a French-speaking press adventure took place outside France. This made the project attractive, not to mention the sun, the idleness, the sea, a pleasant climate in all seasons, a united team. Life was wonderful. "

Beautiful, but complicated. Habib Bourguiba, who would have preferred BBY to stay by his side and devote himself to politics, hardly appreciates the publication in his own capital of a newspaper whose content he does not control. Already, when his former minister came to warn him that he was about to launch Africa Action, the Supreme Combatant did not hide his reluctance, inciting the one he considers his young protégé to abandon his project or, for lack of a better solution, to entrust it to another.

Faced with BBY's stubbornness, he ended up reluctantly reluctantly: “Well too bad. Go. Rabbi Maak ”(ie“ God support you ”). "I should have understood that I would be under surveillance," said the journalist much later.

The weekly is barely a year old when the delicate balance is shattered. Between May and September 1961, Tunisia has just experienced the "Bizerte affair": the French still have a military base in this northern city, and Bourguiba, determined to obtain their departure, chose the showdown, despite the warnings of his entourage and the staff of his army. Militarily, the disaster was complete, but de Gaulle finally agreed to evacuate the base in 1963.

BBY disapproves of the method. He says it, and especially he writes it in an editorial of October 1961. "Personal power", "pride", "contempt" ... The words are strong. Bourguiba telephones, a long discussion begins. “Your arguments are valid, admits the president, but they do not apply in my case, I will know how to avoid the pitfalls that you describe. We leave each other as good friends, at least in appearance. The newspaper is neither banned nor seized.

Very quickly, on the other hand, the "official" press was unleashed against Africa Action. Without much success. Until the day when the governor of Tunis, appointed by the Supreme Combatant, puts on his finest uniform and presents himself at the headquarters of the newspaper. "The president," he explains to BBY, "asks me to remind you that the title Africa Action belongs to him and he wishes to recover it ”.

The team is stunned. Certainly, Bourguiba had launched, in the 1930s, the newspaper Tunisian Action, but this title has long since disappeared, and from there to conclude that the term "Action" is his property ...

Aware that the time is no longer for discussion, BBY asks if he can benefit from a period of a few weeks, time to inform readers of the change of title. The governor transmits and calls back the next day: no delay. Two days before closure, Africa Action no longer has a name.

“I left the office to refresh my ideas and find a solution,” recalls BBY. The new title, of course, had to contain the word “Africa”. " But still ? "I could not find, without looking too hard, Young Africa, he concludes. Africa was young, why not? The following week, November 21, 1961, appeared the first "real" issue of Young Africa.

African states are contributing the most to the anti-covid-19 response ...

Artemisia, baobab… These African plants that could help fight against the coronavirus - Jeune Afrique

Here is the information to remember from President Emmanuel Macron's speech and what ...

African states are contributing the most to the anti-covid-19 response on the continent ...

Belgium: Extended All Saints Holidays: parents can call on…