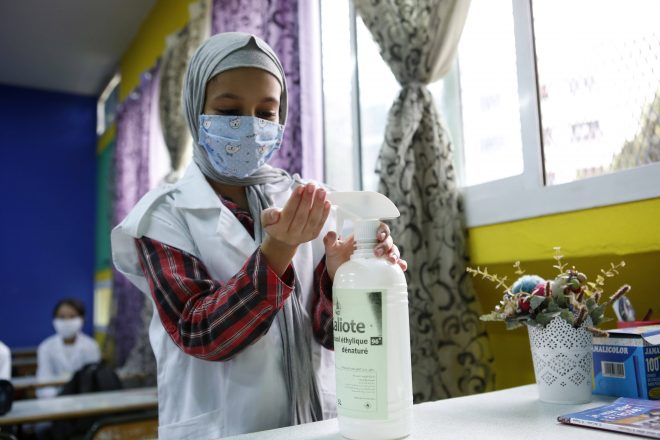 Extended state of emergency in Morocco, partial confinement in Algeria, curfew in Tunisia ... The Maghreb remains one of the areas most affected by Covid-19 in Africa.

For several days, the Maghreb has been facing an upsurge in cases of Covid-19 contamination. Morocco, Algeria or Tunisia, none of the three countries is an exception. All are among the ten African states most affected by the pandemic.

With a total of 156 positive cases for the coronavirus, including 946 deaths and 2 recoveries recorded since March, Morocco is the Maghrebian country with the most contamination. In the Algerian neighbor, the latest data published on October 685 announced 131 cases detected over the same period, for 462 deaths. High figures, but whose evolution is measured for the moment by dozens of cases per day.

Tunisia, which had almost contained the pandemic at the end of June, opened its borders and lifted most of its prevention measures at the beginning of the summer. Consequence: the rate of contamination has resumed vigorously. According to official data, the country recorded more than 1000 new cases daily this week, bringing the number of confirmed cases in mid-October to 34, including 790 deaths, from 512 at the end of June.

This strong increase has forced local authorities to strengthen health measures. Since October 8, a night curfew has been imposed in several cities, including Tunis and Sousse. From Monday to Friday, residents of the municipalities concerned are prohibited from going out between 19 p.m. and 7 a.m. On Saturdays and Sundays, the curfew is between 21 p.m. and 7 a.m. This measure, scheduled for 15 days, could be renewed if sanitary conditions so require. The Tunisian government has also decreed the closure of markets and the cancellation of Friday prayers in mosques.

Similar measures were also imposed on Bizerte. Elsewhere, the curfew is partial and only concerns a few areas, in the north (Nabeul, Zaghouan, Béja and Kef), in the south (Gabès, Tozeur, Gafsa and Médenine) and in the center (Mahdia, Kairouan and Sidi Bouzid), according to the Interior Ministry.

Call for "general mobilization" in Morocco

For his part, the King of Morocco extended the state of health emergency in force from mid-March until November 10. On October 9, he called for “general mobilization” in the face of an “unprecedented” health crisis that has deeply affected the country's economy. In his speech, Mohamed VI placed the recovery of the economy and the strengthening of social protection at the top of the urgent challenges.

At the end of September, the Moroccan Central Bank had to revise upwards its recession forecasts for 2020, counting on a contraction of 6,3% linked to the "slower-than-expected restart" of activities and "the almost total closure of borders Which has plagued tourism, while the drought is affecting the agricultural sector.

Reopening of schools in Algeria

Algeria, for its part, expects a gradual return to normal despite the high but constant number of contaminations. The government is maintaining the latest measures taken last August. Namely, the lightening of the partial containment and the lifting of the ban on movement to the 29 wilayas which were until then compartmentalized to stem the spread of the virus. Mosques also reopened on August 15.

In the school sector, the resumption of face-to-face lessons is scheduled for October 21 in primary schools and for November 4 in middle and high schools. The start of the academic year is set for November 22. The government insists on taking into account the “imperatives linked to the reorganization of university campuses to avoid overloading, especially at the level of the amphitheatres”. He calls for strict compliance with hygienic conditions, in particular for the "disinfection of schools 72 hours before the start of the school year", and "the wearing of a mask imperative for the secondary cycle".

WTO: who are the African supporters of Ngozi Okonjo-Iweala? - Young Africa