Senegal: Sokhna Aïda Diallo, the self-proclaimed "maraboute" who challenges the brotherhood of the Mourides - Jeune Afrique 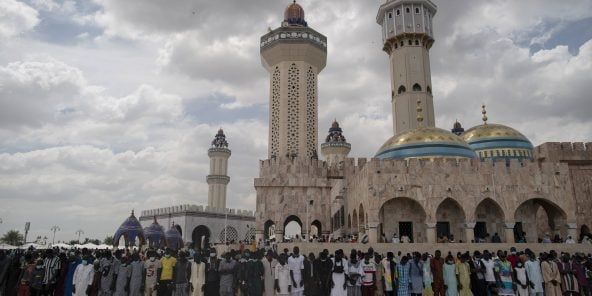 Sokhna Aïda Diallo, the widow of the leader of the Thiantacounes, fell out of favor in Touba. By claiming the inheritance of her husband, she drew the wrath of the Caliph General of the Mourides and part of the powerful brotherhood.

Persona non grata in Touba. Within the very influential Mouride brotherhood, the second largest in Senegal, the status is unenviable. A fortiori when one claims to be a spiritual guide. However, this is what the self-proclaimed "marabout" Sokhna Aïda Diallo faces, who for over a year has drawn the wrath of the Caliph General of the Mourides and numerous dignitaries of the Muslim brotherhood.

The widow of Sheikh Béthio Thioune, the very influential and very controversial spiritual guide of the Thiantacounes (a current of the brotherhood), has fallen from grace in the holy city of Mouridism. To the point of being banned from organizing any religious celebration at his home in the Diourbel region on the occasion of the Magal de Touba - the main pilgrimage of the brotherhood - celebrated on October 6.

To understand the campaign of ostracization of which this forty-year-old is subject, we must go back to the death of her husband in May 2019. While he has just been cundamaged by the Senegalese justice in particular for "complicity in murder", the sheikh died suddenly in France. A war of succession then began between his fifth wife and his eldest son Serigne Saliou Thioune “Gueule Tapée”.

Abolition of slavery in Haiti: Toussaint Louverture, the man and the myth - Jeune Afrique

Congo: commemoration of the 80th anniversary of the "Brazzaville Manifesto" - Jeune Afrique