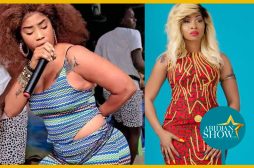 Vitale was nominated for the second year in a row "Best female artist Coupé-coupé 2" at the recent edition of the Primud. The designation of Vitale was not to the taste of its competitor Sandia Chouchou. Because for her, it is therefore unacceptable that Vitale won after having slammed the door and then returned to the competition following her reconciliation with Molare the organization of this ceremony of musical distinction.

Read also: Death of his son: comedian Papitou grateful for the support received

She therefore violently attacked her elder sister, the Beyonce, on social networks through a direct on Facebook.

Following her release on social networks where she attacked Vitale, Serge Beynaud's ex-dancer apologized in these terms:

“… I wanted to apologize to my grando Vitale for my direct yesterday. It was full of anger, I shouldn't have mixed her into this story. I have nothing against her at all. I'm sorry… ". Sandia Chouchou addressed Vitale to apologize.

This Article Sandia Chouchou reacts against Vitale again after her temper tantrum at Primud first appeared on Abidjanshow.com.

This article appeared first on https://www.abidjanshow.com/sandia-chouchou-reagit-a-nouveau-contre-vitale-apres-sa-crise-de-colere-aux-primud/

Three dead as a result of a traffic accident in Garoua