Madagascar is stepping up initiatives against malnutrition - Jeune Afrique

By TELES RELAY On October 11 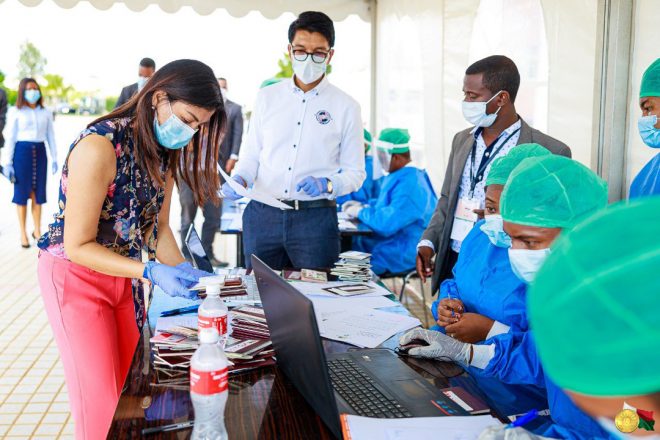 Backed by the development of agribusiness, the fight against malnutrition, which affects 55,8% of the Malagasy population according to the FAO, has been made one of Andry Rajoelina's priorities.

By awarding Andry Rajoelina the title of “champion of the fight against malnutrition” last February at the 33rd African Union summit, the president of the African Development Bank (BAD), Akinwumi Adesina, had certainly valued the initiatives taken by the Madagascan president so far, but he had above all spurred him on for the future.

Crowned with this title, the Head of State knows he is expected at the turn and must more than ever prove himself to allow the country to eradicate this scourge. Last February, in the context of improving nutritional quality, access to drinking water and the food supplement manufacturing project, the presidency listed its priority commitments.

At the time, in particular, “the creation of national, regional and local structures to support policies dedicated to improving nutrition and eating habits”, “increasing food production” or again "the establishment of factories from north to south of the country for the transformation of moringa and spirulina into food supplements to be distributed in schools, especially in the south".

At the bedside of the southern regions

Seven months later, the Madagascan president took a big step in this direction. On tour in the south of the country, Andry Rajoelina inaugurated on October 5 the Chamber of Agriculture of the Androy region, an exchange platform bringing together family farmers 'cooperatives, which will "strengthen farmers' cooperatives and improve the quality of our agricultural production" , he stressed, insisting on the need to achieve food self-sufficiency.

Two days earlier, he had visited the communes of Ifotaka, Behara, Ebelo as well as in the district of Tsihombe in order to assess the care mission initiated a few months ago by the ministry of public health, enabling children and adults with symptoms of severe malnutrition to benefit from nutritional treatment. On this occasion, food and food supplements were distributed to children, in collaboration with the World Food Program (PAM).

Beyond emergency aid, Andry Rajoelina announced the installation of pipelines and borehole systems to deliver drinking water to localities affected by drought, as well as the establishment of four nutritional rehabilitation centers. intensive and medical in the four southern districts (Amboasary Sud, Tsihombe, Ambovombe and Beloha Androy). In particular, they will be responsible for distributing food supplements based on moringa and spirulina, and providing treatment to victims of malnutrition.

Same approach in the district of Tsihombe (Androy region), where the State is extending its support to the poorest families through the distribution of Vatsy Tsinjo (essential kit comprising mainly CVO herbal tea, a 50 kg bag of rice, sugar, cooking oil, pulses and canned condensed milk) to more than 500 vulnerable households. It was also the occasion to announce that the local intensive and nutritional rehabilitation center will be established in the establishment managed by the Daughters of Charity nuns.

These initiatives come less than a month after the signing of the partnership agreement between Nutriset, the Mérieux Foundation and the Malagasy government, prior to the establishment of a plant to produce nutritional solutions against malnutrition in the south of country, which will be located in Fort Dauphin, capital of the Anosy region. While a third of the region's children are stunted and 10% of the infant population is acutely malnourished, it aims to produce and distribute 600 tonnes of nutritional solutions each year.

France: A woman strangled in the presence of her 2 children, her ...

[Tribune] In Nigeria, police violence must not ...

When West African savings cooperatives get up to speed - Jeune Afrique

France: A woman strangled in the presence of her 2 children, her suspected companion

[Tribune] In Nigeria, police violence should not obscure the abuse of…

A family of a soldier killed by an elephant