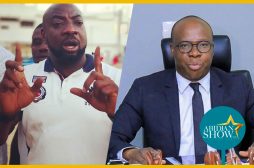 Siro is not at all happy with Asalfo and the Magic System Group. During a television program, the pair of Yodé did not fail to castigate the attitude considered by him "not very supportive" of Magic system which organizes in yamoussoukro a concert.

"A'salfo does not have the zouglou spirit", launched Siro, for whom the whole Zouglou family was to be gathered around the concert “My Gbonhi” on October 10 at the Palace of Culture. The message had a resounding echo on the web because it provoked a great debate. Everyone going there with their comments and their vision of this situation. The vocal lead of the group Magic System took advantage of his passage during a radio program on October 08, 2020 to lift a veil on the facts and reassure the many lovers of zouglou. For him, no need to create big controversies on this subject.

Read also: Siro: "Emma Lohoues is the most beautiful woman in CI"

To inform the members of the "zouglou family", the manager of Gaou Production wanted to be conciliatory:

“A concert where we travel with hundreds of people cannot be improvised. It takes months of preparation… Our date had been set for a long time, it was the others who came to find us. "

Read also: Cinema: Two Ivorian directors in the running for the 7th edition of the Émergence festival in Lomé

France: A woman strangled in the presence of her 2 children, her ...

[Tribune] In Nigeria, police violence must not ...

“For an organization that took months of work, I cannot go to my partners in the EU to ask for a postponement on the pretext of going to support a friend… ..Magic System is organizing this concert with the European Union, this which means that we will travel with the ambassadors of all the member countries of the EU (present in CI). " In passing, A'salfo responded to some harsh criticisms read on the web:

“To those who say that we were paid to demobilize during the opposition rally, I ask how much they gave to the European Union. The EU is too serious an institution to fall into such a scheme… ”.

To both, Salif Traoré reminded:

“I am a volunteer ambassador for peace. I am also an economic, social, cultural and environmental advisor. So I do all of this for the community. "

This article appeared first on https://www.abidjanshow.com/musique-siro-attaque-asalfo-risposte/

"Mbarga Nguele is my father"

Wizkid President Buhari: “Trump is none of your business! Old man. Take care of your Country ”!

France: A woman strangled in the presence of her 2 children, her suspected companion

[Tribune] In Nigeria, police violence should not obscure the abuse of…

A family of a soldier killed by an elephant