[Tribune] Senegal on the path to gastrodiplomacy - Jeune Afrique

By TELES RELAY On October 6 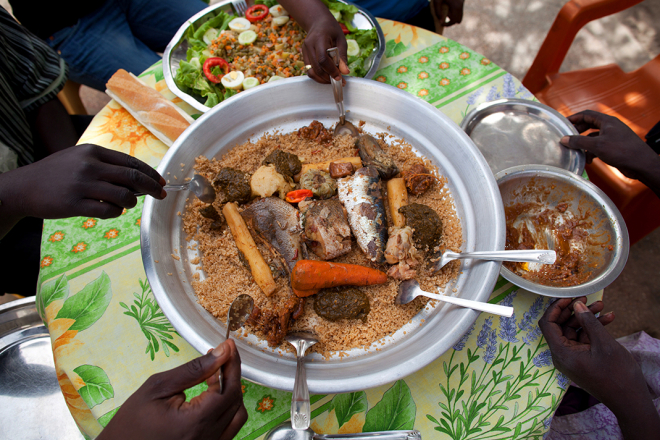 Thanks to tièèbou dien, its most emblematic dish, Senegal extends its influence far beyond the continent. A role of ambassador in the process of being recognized by Unesco.

Senegal is one of the most hospitable countries in the world, as logically evidenced by its name, Tèranga [which comes from the Wolof words teer / teerul, which mean "to welcome"].

In addition to the hospitality it shows, this country on the west coast of Africa also knows how to provide food and shelter. Sharing is therefore the golden word that underlies living together in Senegal, especially when it comes to tasting the national dish of tièèbou dien, in an atmosphere that is both friendly and fraternal. In this case, the art of the table is indeed characterized by a service exclusively by hand of all the guests, around a common dish, and this according to a set of ritualized gestures.

Created by Senegalese Penda Mbaye (1904-1984), tièèbou dien, that is to say rice with fish, is Senegal's most emblematic dish. But what very few people know, on the other hand, is that this dish is a culinary loan, likely the fruit of contact with people from Europe or Asia.

On closer inspection, tièèbou dien is rice pilaf revisited. It is made with rice cooked in a broth composed of peanut oil, fresh and / or concentrated tomato, seasonings (garlic, chili, parsley, onion, etc.), vegetable garnishes (carrot, okra , cabbage, eggplant, leaves and sepals of guinea sorrel, etc.) and tuberose (manioc) and, finally, of fish. And depending on whether we are looking for umami (the fifth fundamental flavor) for a taste refinement, we will add yèet, a fermented gastropod mollusk. Moreover, in the opinion of professionals, a good tièèbou dien cannot be done without yèet.

The genius of the now very famous cook in the preparation and cooking of this dish contributes, in one way or another, to Senegal's influence internationally. So that several countries, African in particular, have adopted the tasty dish, not without adding their personal touch - starting with the appellation: Senegalese rice in French-speaking countries and jollof rice in English speaking countries.

Cameroon, which concentrates a large Senegalese community, has appropriated this dish for several decades. This is evidenced by the presence in large cities such as Douala and Yaoundé of many so-called Senegalese restaurants popular with the Cameroonian populations.

It should be noted that the first Senegalese who set foot on Cameroonian soil were volunteers who came around 1910 to work on the Douala railways. Some of them will settle there permanently. From one of the unions that will follow will be born the famous Cameroonian musician Aladji Touré.

On September 2, 2020, Ashley Vola and Kelly Cynthia, Cameroon representatives at the Plate of Origin Cooking World Cup, broadcast on the Seven Network channel in Australia, beat Than and Duncan from Vietnam, with the main course being jollof rice with chicken, that is to say the tièèb ganaar.

The importance of eating with your hands

The jury, made up of three members, was obviously won over both by the tasty quality of the dish, but also and above all by the storytelling relating to the importance of eating with your hands. Couldn't this obvious appropriation of the Senegalese national dish have created a diplomatic incident? Nothing is less sure.

A state is all the more influential at the international level because it uses parallel diplomacy. It is with this in mind that, during the Saint-Louis Jazz Festival, Senegal expressed the wish to include its dish ambassador on the list of the intangible cultural heritage of humanity. This approach with Unesco aims, according to its initiators, to safeguard the knowledge and know-how linked to the preparation of the culinary specialty.

In addition to this reason, obvious at first glance, it is necessary to foresee geostrategic reasons: the tièèb Penda Mbaye can reinvent tourism, but also, and especially, influence the world. One thing is therefore certain, Senegal is embarking on the path of gastrodiplomacy.

The French Publicis is increasing its net income for the 3rd ...

[Chronicle] Sexual violence in the DRC: uncompromising WHO - Jeune Afrique

Léonora Miano: "I believe in the power of Afropean lobbying" - Jeune Afrique