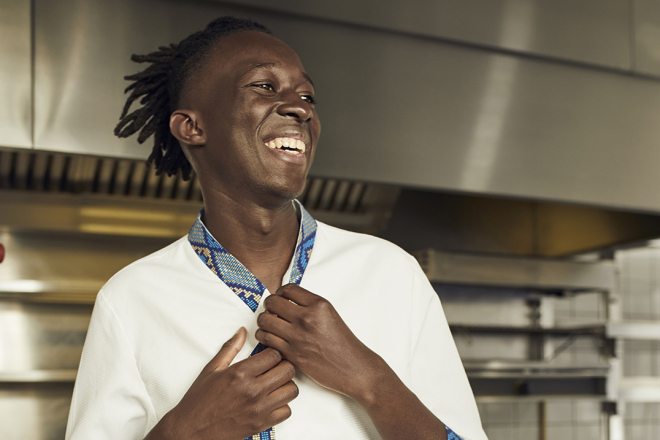 In his new Parisian restaurant called Mosuke, Mory Sacko gives a boost to French gastronomy by enriching it with African and Japanese flavors.

The new face of French gastronomy has Malian roots. At 28 years old, Mory Sacko, slender figure, dreadlocks gathered in a ponytail and rings in the ear, does not hide his ambition. He is aiming for the Michelin star. "It's an assumed objective, but not an obsession," admits the former second of starred chef Thierry Marx.

While many restaurants have gone out of business due to the health crisis linked to Covid-19, this young chef has just inaugurated Mosuke - a contraction of Mory and “Yasuke”, in reference to Japan's first black samurai - a Parisian gourmet restaurant located in a business district of the 14th arrondissement. His rereading of dishes and know-how from Africa, Japan and France is enough to arouse curiosity.

“Since the opening, I have had the opportunity to receive a multicultural clientele, observes the ex-candidate of the cooking show. Top chef. The other day, an Ivorian restaurateur discovered my cuisine, sitting not far from a Japanese journalist. The two told me to have found their respective countries on the plate, while being surprised, ”he slips, not without pride.

Uganda is rehabilitating the 375 km of the Tororo - Gulu railway…

Belgium: Emmanuel André: “Why do we have to wait for…

Community tensions and exile: Lebanese football is not immune to the crisis - Jeune Afrique

Belgium: Emmanuel André: “Why do we have to wait until hospitals are saturated…