Restitution: at the heart of the trial for attempted theft at Quai Branly - Jeune Afrique

By TELES RELAY On October 3 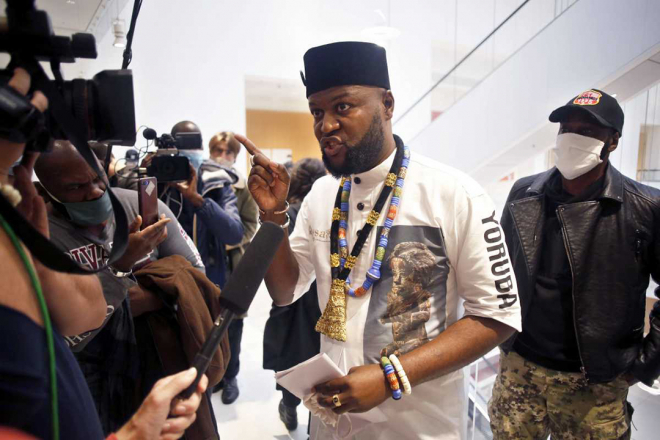 The five activists who had torn from its base a Bari funeral post at the Quai Branly museum in June 2020 appeared before the Paris court on Wednesday. Report of a hearing where the “colonial continuum” was discussed at length.

Many of them, on the morning of September 30, came to the Paris court to support their comrades from the Unity, Dignity, Courage (UDC) association prosecuted for attempted theft in a meeting, with damage to a classified object belonging to the Museum. du quai Branly - Jacques Chirac. Access to room 4.03, where the trial was held, being reserved for a limited number of people due to the Covid-19 pandemic, it is in the corridors that the Pan-African activists made their voices heard.

Understanding but firm, the president of the jury spoke from the outset to the spokesperson for the group, the thundering Congolese Mwazulu Diyabanza Siwa Lemba (41) to appeal for calm. "If the situation is not appeased, if we do not obtain absolute silence guaranteeing the serenity of the proceedings, I would be obliged to order the postponement of the trial", declared the judge. With good grace, Mwazulu Diyabanza complied with his request and, once calm returned, the trial of the five defendants was able to proceed peacefully.

In view of the law and the alleged facts, the acts committed by Thibault Bao Abdelkader, Romain Catambara, Dihaoulou Bonelvy, Djaka Apakwa and Mwazulu Diyabanza could seem insignificant. On June 12, 2020, at the beginning of the afternoon, a group of raised activists bought entrance tickets to the Quai Branly museum. Once inside, they harangue the visitors present, led by their charismatic spokesperson. At the heart of their speech, the need to return to Africa the goods looted by France and the West during the colonial period.

Driven by these demands, carried by anger, they end up detaching a Bari (Chad) funeral post from its base, shouting that they are going to bring it "home". The scene was filmed live by Djaka Apakwa and broadcast on the Facebook page of the UDC platform. The intervention of the security of the museum put an end to the "happening", the funeral post was returned without violence and the five activists were immediately arrested by the police.

"Judging an act, and not History"

If this trial is not trivial, it is because it comes at a time of extreme tension around the issue of restitution of cultural property to Africa. The president of the jury felt it well and, from the opening of the debates, wished to make a clarification. “Today there are two trials,” he said. The trial of four men and a woman prosecuted for two offenses and which will be tried in law. And then there is another trial, that of the history of Europe, colonialism, cultural misappropriation. "

Uganda is rehabilitating the 375 km of the Tororo - Gulu railway…

Belgium: Emmanuel André: “Why do we have to wait for…

Belgium: Emmanuel André: “Why do we have to wait until hospitals are saturated…