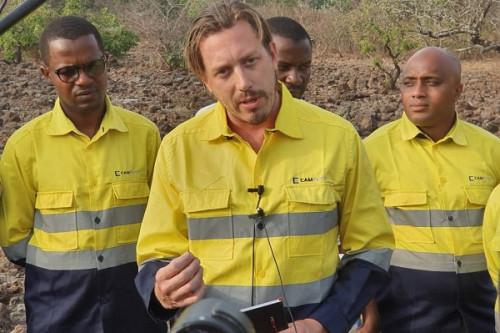 Is this a clue that one of the biggest events…

(Business in Cameroon) - Expected for several decades, the exploitation of the Minim-Martap bauxite deposit in the northern part of Cameroon could begin during the year 2022. At least that is the wish issued on February 13, 2020 in the locality of Minim by James Durant (photo), the manager of this project entrusted by the Cameroonian government to the Australian mining junior Canyon Resources, and implemented by its Cameroonian subsidiary, Camalco.

Just over a year after Camalco launched the last research phase on this mining project (in September 2018), James Durant stayed in Cameroon from February 13 to 14, 2020. He was accompanied by a team made up of experts in mining, rail and environmental logistics. These experts came to touch the realities on the ground, in order to finalize, by the end of April 2020, the pre-feasibility study for this mining project.

The mission visited Ngaoundal, Minim and Martap. During this field visit, James Durant clarified that Canyon Resources, fortified by the results obtained during the complementary exploration work, aims to launch the exploitation of the largest bauxite deposit in Cameroon (and probably in Africa) in the year 2022.

The current scenario, which must be refined and presented to the Cameroonian authorities and potential financial partners, provides for the opening of a road of around twenty kilometers which will leave from the various exploitation sites up to the locality of Makor. From this locality in the Adamawa region, which houses a train station, the ore will be transported by rail to the port of Douala or Kribi for export.

Initially, we learned, Canyon Resources, which has three non-renewable 3-year exploration licenses on the Minim-Martap, Ngaoundal and Makan deposits, intends to produce and export a cargo of 3 million tonnes each year, before gradually ramping up. This is a real boon for the Cameroonian rail transporter, Camrail, which so far has never reached the 2 million tonnes of goods transported per year.

12-04-2019 - Phillip Gallagher: "Minim Martap could become one of the largest and richest bauxite deposits in the world"

Jim Carrey called "sleepy" for flirting with a journalist - people

Is this a clue that one of Apple's biggest events could be ...

"We must create African civil law" - Alhousseini Diabaté, guest of…