08:39 am: Paris Match editor Bruno Jeudy announces on twitter that Benjamin Griveaux throws in the towel and abandons the municipal race 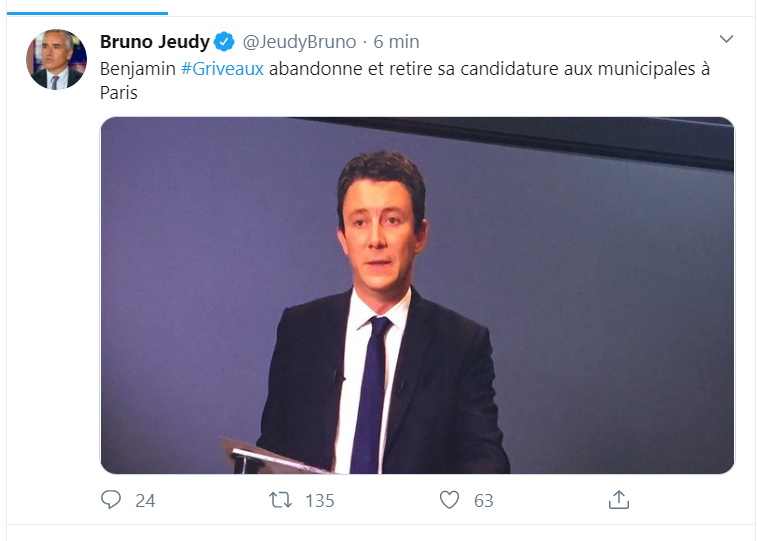 08h16: Europe 1 confirms information about an ongoing crisis in Camp Griveaux and says: "Tense situation for Benjamin Griveaux. The LREM candidate for mayor of Paris canceled his two media meetings of the day, on RTL and Europe 1. The reason: a video of a sexual nature which could concern the candidate - of which we have no proof of authenticity - circulating on social networks since Thursday evening. If the doubt still exists, it seems serious enough to cause trouble within the staff of Benjamin Griveaux.

Since Thursday, the crisis meetings have been linked together. In an internal message broadcast that evening, Benjamin Griveaux asked his campaign team to meet him at his HQ for consultations. At this stage, and according to Europe 1, Benjamin Griveaux has not published a denial or filed a complaint. "

08h06: Dominique Reynier professor at Science Po analyzes on RTL what is happening this morning around Benjamin Griveaux and the violence of the attack he undergoes through the publication of this video

#Grows : "Faced with such a media regime and social networks, we are overwhelmed by violence, rhetoric and physical, it is clearly a danger for democracy", @DominiqueReynie in #RTLMorning with Yves Calvi pic.twitter.com/APo32yspgi

07:52 am: Crisis in the Griveaux clan this morning according to the information revealed a few minutes ago by RTL. The station writes on its website : "This Friday morning, he was to be RTL's guest but canceled his visit. He also canceled his participation in several media meetings and especially a public meeting scheduled for 8:30 am, which was to be broadcast on social networks. Instead, Benjamin Griveaux invited his campaign team to his HQ at 9 a.m., for what looks like a crisis meeting.

The source of this panic? An intimate video and correspondence posted on the internet and attributed to the candidate, but which have not been authenticated or denied at the moment. "

Benjamin Griveaux has canceled all his media meetings including RTL and summoned his team this morning at 9 am https://t.co/jVrgDYHWnn

Cameroon-Alternation at the top of the State: Paul Biya is not…

From preventive health to twinning, here's why you want to…

This article appeared first on https://www.jeanmarcmorandini.com/article-416164-en-direct-municipales-apres-la-diffusion-d-une-video-a-caractere-pornographique-et-non-authentifiee-cette-nuit-sur-le-net-benjamin-griveaux-annule-toutes-ses-interviews-et-ses-rendez-vous-annonce-rtl.html

How months of miscalculations brought the U.S. and Iran to the brink of war - New York Times

Who are the rich in France?

Cameroon-Alternation at the top of the State: Paul Biya is not Alassane Ouattara

From preventive health to twinning, here's why you want to get started in…